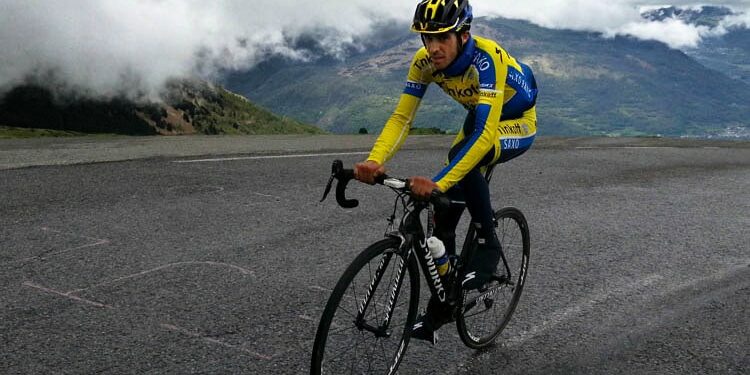 Alberto Contador has put an end to a very successful spring season but has already started the preparation of his major target: the Tour de France. Last week he made a reconnaissance of the decisive stages in the Pyrenees and the final long time trial of the French race.

Last week Alberto Contador traveled to France from Lugano for a reconnaissance of the stages in the Pyrenees and the last time trial of the 2014 Tour de France Accompanied by JesÃºs HernÃ¡ndez, the leader of Tinkoff-Saxo made a break from his first training block before participating in an altitude training camp prior to the DauphinÃ© that will be his last race before the French tour.

â€œThe Saint Lary stage will be really tough. At 124 km, it is not long, but more than half of it is uphill, with Portillon, Peyresourde and Val Louron before the final climb. It will be a fast day and difficult to control for the leader. It gives options to make tactical moves.”

Regarding the Hautacam stage, Contador believes it will be â€œan easier day to control. There are two small climbs before the Tourmalet, but the important aspect is that after its descent, there are only very few kilometers to the start of the Hautacam which may result in some attacks already on the Tourmalet”

Cotador who did not know this last climb, says that it’s â€œreally hard, and especially because it is the last mountain stage of the 2014 Tour.”

Contador points out that the Pyrenees â€œwill be the third mountain range after the Vosges, which will do a lot of damage and create the first differences, and the Alps that are perhaps less hard than they have been in other years. The three Pyrenean stages will be crucial because if the leader has a bad day he can lose everything.”

In addition to the Pyrenees, Contador also studied the course for the last time trial, which he said will be â€œvery demanding because of its length, 54 kilometers. It will be one of the hardest days of the entire race, depending on how the classification is at that time, but in recent years it has been the stage that has decided the race. I would have preferred to have a pair of climbs, like last year, but you have to adapt to the course and I hope Iâ€™ll have a good day.”

Alberto Contador climbing Hautacam, on the really hard bit 3km from the finish.