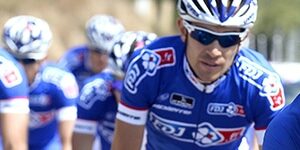 The French World Tour team,Â Francaise des Jeux, are in the Pyrenees this week for some mountain training in preparation for Le Tour de France. The team which is sponsored by the French national lottery, www.fdj.fr will beÂ built aroundÂ Thibaut Pinot. Pinot is a very talented rider. He is 24 years old and many (including myself) see him as the next French winner of Le Tour after Bernard Hinault in 1985, 29 years ago.

In 2012 Pinot won stage 8 from fromÂ BelfortÂ toÂ Porrentruy, which comprised seven categorized climbs including the Category 1Â Col de la Croix, where he passedÂ Fredrik KessiakoffÂ (Astana) shortly before the summit. He then negotiated the descent and the flat portion of road before the finish situated 16Â km from the climb. He held on to his lead over the chasing group which included some of the Tour’s General Classification contenders despite the head wind, being frantically encouraged by his team manager,Â Marc Madiot. He crossed the line alone with an advantage of 26 seconds over the chasers.Â Despite being the youngest rider of the Tour,Â he managed to finish 10th overall in the general classification. At 22 years and 54 days, he became the youngest rider to finish in the top 10 sinceÂ Raymond ImpanisÂ in 1947, who was then 21 years and 8 months old.

At the 2013 Tour de France, Pinot abandoned the race on stage 16. He finished 7th overall in theÂ Vuelta a EspaÃ±a.

Along with Thibaut Pinot in the PyreneesÂ are Arnold Jeannesson, JÃ©rÃ©my Roy, Kenny Elissonde, CÃ©dric Pineau and French National Champion Arthur Vichot. Other riders will join them on Monday evening in Argeles-Gazost where they will stay until Thursday.